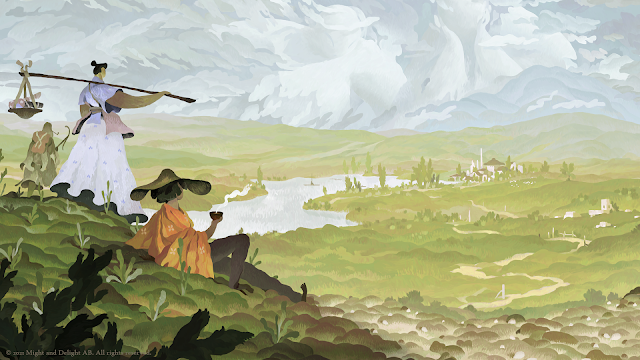 Have you fallen out of love with MMOs in the past few years? Do you tire of the fetch quests, the stats, the buffs, the nerfs, and the busy UI? Do you perhaps tire of…all the other players? The folks at Swedish developer Might and Delight have been hard at work on those problems for more than two years now, and they think they’ve come up with something special.

Their answer to modern MMO malaise is Book of Travels, what M&D has taken to calling a TMORPG (Tiny Multiplayer Online Roleplaying Game), and which – after a very successful Kickstarter campaign in the fall of 2019 – releases in Early Access today on Steam. I’ve been playing a very early, pre-Early Access version for the past week or so, and I’ve got some thoughts to share about the experience.

Full disclosure, the version of the game I’ve been playing was open only to people who’d backed the game on Kickstarter (which I did not), or made a late pledge on Backerkit (which I did).

First thing’s first: Book of Travels is gorgeous. Every piece of concept art has always oozed a particular, painterly charm, like you’re looking through your best friend’s sketchbook, and this style and beauty extends to the game as well. The painted world of the game’s starting area, Braided Shore, stretches out around you in rich, vivid color, rippling and pulsing and moving as you do. Foreground elements seamlessly fade in and out as you walk in front of and behind them, revealing and obscuring the path beyond. It looks and feels as if your character is walking through a painting that’s still being painted. It’s a strong first impression that immediately places you in the mindset that Book of Travels is unlike any MMO you’ve ever set foot in before.

Talking of first impressions, BoT’s character creation process is equally as striking and unique as what lays beyond. Rather than deeply customizing a digital avatar that changes on screen as you choose their physical characteristics, the game has you choose from a set of hand-crafted “Forms,” which are not entirely analogous to classes in common MMO parlance, but do determine some mechanical traits that affect how your character engages with the world.

It’s difficult to compare Book of Travels’ character creation process to existing MMOs at all, because it’s actually much closer to the experience you might have crafting an avatar in a tabletop RPG. This is because, unlike most MMOs, the process Might and Delight have set up eschews sliders and stat allocation in favor of free text fields and a limited palette of arcane choices whose effect on your character may not be immediately apparent. To put it another way: it’s not about math, it’s about the vibes.

In fact, that could easily be Book of Travels’ back-of-box slogan. When Might and Delight set out to create their new game, a focus on vibes was the order of the day. Part of their initial Kickstarter description reads, “There is no overarching goal, no real beginning or end, and ultimately you are in charge of shaping your own journey.” In this regard, M&D have hit the nail right on the head.

Contributing greatly to the game’s impeccable vibes is the soundtrack. From the moment you hit the login screen, the music of Braided Shore beckons you to become lost inside its magical world. Not having a musical background myself, I feel somewhat ill equipped to describe what I’m hearing, but it sounds to me somewhat Middle Eastern, somewhat medieval in its inspiration. The result is at once an inspiring call to adventure, a serene invitation to nap beneath a tree, and a haunting ballad that will stay with you long after your first play session.

The world of Book of Travels, while currently limited due to its Early Access status, feels rich, if not entirely full (just yet). There are farmers tending fields, dockhands unloading trade shipments, and the requisite cast of merchants in each town you’ll visit. But there are also lost cartographers, old men decrying the folly of today’s youth, traveling mystics, lost languages, abandoned shrines, machines that may no longer be understood, and deeper in the woods, something darker. All of this works together wonderfully towards making the world of Braided Shore feel like a land with history. You’ve showed up very much in the middle of something, as any traveler might expect they would.

While the world’s vibes are – like those of the game as a whole – extremely good, I must confess to a feeling that there isn’t too terribly much to do just yet. Having said this, it’s important to note that the game moves at a purposefully slow pace, I’ve only played about ten hours total so far, and some of my progress through the world has been hindered by the usual bugs that one should expect when playing a game in such an early phase of development. It’s completely possible there is much more waiting for me just past the next town, but for now, in terms of content at least, the game still feels early.

Book of Travels‘ gameplay and UI, however, are a masterclass in simplicity, and I’d be more than happy if what we see of it today is the final version. It functions very much like a classic point-and-click adventure game. You point your mouse and left-click to walk, or right-click to run to your chosen spot. If you click on an interactive object, you’ll interact with it. If you click on a person, you’ll see options to talk to them, and if possible, trade with them. This simple mode of gameplay takes things pretty far. It turns out you don’t need a high APM to be able to do some fun and interesting things in an online RPG. For instance, I’ve already traded for several different types of cheese, acquired a sweet purple shirt, completed some tasks for busy townsfolk, and learned to both read and fish!

The UI is similarly elegant. You don’t have six different inscrutable hotkey bars, no guild menu, nowhere to purchase in-game currency, and no chat windows providing a constant, scrolling wall of racial slurs. In fact, in what might be their greatest innovation in the MMO space, Might and Delight have decided not to include any chat functionality whatsoever. Instead, should you happen upon another player (this is intended to be something that happens once in a great while), you have a number of emoji-like pictograms that you can use to try and communicate with those around you. The pictograms range from simple waves hello or goodbye, to different emotions, to simple references to things you might see in the world, like trains or boats.

For me, this lack of direct communication is the crux upon which Book of Travels achieves its core mission: to create a serene online RPG. You can play with others if you wish, and there are even certain tasks, called Endeavors, that you will often need other players to help you complete. But ultimately, Book of Travels is billed as a game of solitude. This is your story, your journey, your world to explore and to make something of your time within it. It’s a game for looking inward as much as outward, if not more.

Maybe you’ll meet another person. Maybe you’ll be able to communicate and connect. Maybe you’ll work together to do something interesting or even transcendent. But at the end of the day, you’ll go your separate ways, no doubt both still thinking about the time you met. And if you don’t part ways, if you decide instead to travel together, then what a special connection you will have made.

In making Book of Travels an online game where other players are rare, a Tiny Multiplayer Online RPG, Might and Delight seeks to turn the very thing that makes an MMO an MMO – something we’ve all come to take for granted – into something once more novel, respectful, and cooperative. A nicer way of interacting with strangers online. They just may have succeeded. I can’t wait to see how their next chapters unfold.

Book of Travels is available in Early Access on Steam for both PC and Mac.