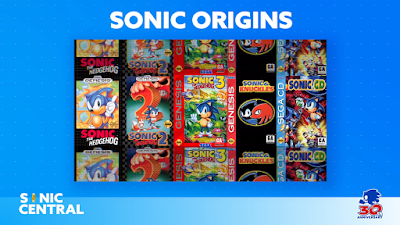 Last week, Sega put out a whole big video presentation that they called “Sonic Central,” showcasing all the various Sonic media being released this year and next for the best blue boy’s 30th birthday celebration.

It was cute! And there were some solid announcements. Chief among them, that Sonic 3 will actually see the light of day again after a long absence from digital store shelves, as part of Sonic Origins, a new collection of classic Sonic games coming to modern platforms in 2022.

Yeah. You read that right. This is not just another bland return to the zones of Green Hill and Chemical Plant. Sonic 3 is in this thing. That’s a big deal. And Sega clearly knows and is acknowledging that this is a big deal. Just look at that design. Sonic 3 is front and center, big and bold, loud and proud. And sure, this is also just the order in which these classics were released, but all design has meaning!

I longed to play the big 3 on my 3DS back in the day. I’ve longed to play it on my Switch ever since Sega started releasing old games under the SEGA AGES banner. But still there was silence. It was even missing from Sega’s Genesis Mini. Their own dang hardware!

Ten years is a long time to go without the best game in any series. So why the holdup? Well, there’s been no official word from top brass, of course, but according to a number of anecdotes from folks close to the situation, it has a lot to do with Michael Jackson. Or at least his estate.

Jackson not-so-famously worked on the soundtrack to Sonic 3, an arrangement that sort of fell apart after Jackson was reportedly unsatisfied with the way his music sounded on the Genesis. And then some other things happened with Mr. Jackson also. He is not listed in the game’s credits.

Apparently though, and I obviously do not and will likely never know the score here, licensing of the game’s music is what has prevented it from reappearing at various points throughout the past few decades.

In 2014, after working on ports of Sonic 1 & 2 for Android and iOS, some of the folks who would go on to make Sonic Mania proposed a port of Sonic 3. Sega did not move forward with the project, leading one of the developers involved to speculate that legal issues regarding the game’s music were to blame.

And providing probably the clearest idea of the truth we’ll get, in 2018, following the announcement of the Sega Genesis Mini, Polygon asked AtGames, the company working on the console with Sega, whether Sonic 3 would be included. According to Polygon, “AtGames replied that it wouldn’t be included because it ‘has license issues with the music.’” Seems pretty cut and dry!

It remains to be seen whether Sega has indeed cleared whatever legal hurdles stood in its way and this incarnation of the blue blur’s third adventure will be released in its full glory once more, or whether they’ve decided to sidestep the issue altogether and replace the tracks in question, as they did for the initial PC port in 1997. Though, I can’t imagine they’d go the replacement route, since fans have been clamoring for a new port for round about a decade now, and this is the hedgehog’s big 3-0. That would be pretty disappointing.

In any case, I’m thrilled to see that my personal favorite entry in the Sonic series will finally be making a comeback. I can’t wait to get my hands on it once more, if only to play hours and hours of that damn “Collect the Spheres” bonus game. That thing is the devil, and I am easily tempted.